How I Found Out I Had Cancer

September 20, 2020
I realized I never shared about how I found out I had cancer, so here it goes.
Biopsy results from the colonoscopy came back negative for cancer, they were pre-cancerous. Because one of them was so big I was going to require surgery to remove it and then they would take the other one out at that time. We were relieved to find this out.
My surgery ended up being more complex and my hospital stay was long and traumatic. They did not have my pathology results when I was released. They did not call me with the results. I had to wait for my two week post op appointment when they were removing my staples. Those were a hard two weeks.
We went in to get my staples removed and a doctor came in explaining what they did in the surgery and why and then says “they were both cancer”. At that moment I stopped breathing and felt like I was going to pass out. I squeezed Trevor’s hand so hard. Then the doctor’s phone buzzed and he says “oops sorry I’m on call so I have to look at this”. He proceeds to text away, making jokes to himself all the while we are sitting there stunned waiting for more information like, is it in my lymph nodes will I need further treatment. I thought Trev might punch him.
Eventually he looks back up at us almost as if he forgot we were there and says “oh sorry uh where was I... oh yeah, it’s in your lymph node so you will need chemo and radiation”. And that was about it.
Then I had to endure a nurse taking out 26 staples as she tried to joke with me and be lighthearted most likely not knowing about the news we received. We left in silence. As soon as I got home I began sobbing. We sobbed together. I spent the next week or two crying hard every day, calling in for anxiety meds and then calling in for stronger ones, barely able to leave my bed.
There’s no easy way to find out you have cancer- but this was a terrible way. 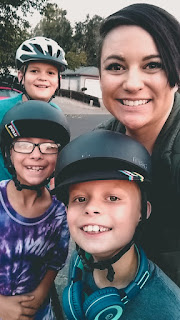