I posted these pics from the 4th, but never posted any others! after the birth, we had a BBQ at my parents, and then came back to our house to put the twins down for bed and sat outside to watch fireworks with Jack. Our neighbors shared some sparklers (Jack's first time!) It was fun and special. 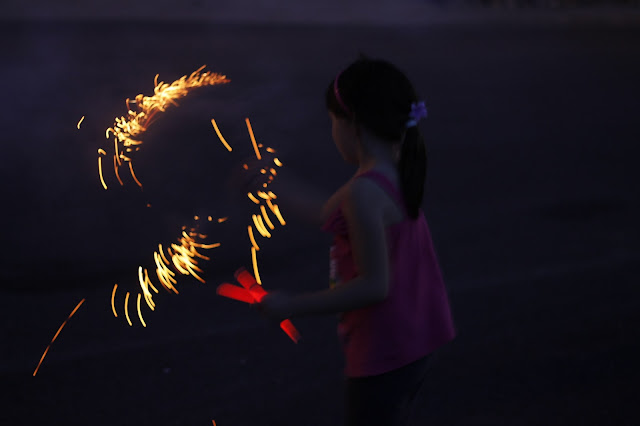 Speaking of the twins and in bed. They are now in twin beds. Eek. I swore I'd keep them in their cribs until Kindergarten at least. But they began crawling out, all. the. time. They did great and never fell, but it signaled time to switch. We don't do the toddler bed thing, seems silly to buy a small bed and then have to buy a bigger bed eventually. So we got a screamin' deal on a set of beds that can be made into bunks when they are older! It's been......tough. Jack just stayed in bed and until recently would call for us in the morning to see if he could get up.

These guys are like "hey, let's play!" I mean...there are two of them, who would want to lay down and sleep when they could make a mess and play. So, right now we are standing in their until the fall asleep. Usually only 15 minutes at naptime, but bedtime is like an hour. LAME. We tried the "silent return to bed" aka Super Nanny and it's just different with two. Hopefully soon they will start easing up on us....and we don't have to stay in there.

Any TWIN parents that have advice, let us know! Not to rule out the singleton peeps, but really...it's just different :)

It's been super hot here, so we haven't been outside as much as you would hope for summer....too hot is no good. That means we've been a bit cranky and a lot stir crazy. Hopefully it will get a tad cooler soon so we can be outside more.


Welp, the time has come. I swore on my life I would never. But then reality hit and now I am embracing it...we are getting a van!
Our car is having some issues and so it's time to transition. We are getting a 2004 Honda Odyssey YAY! Hopefully a year or two in and we will be able to get maybe a 2008. I'm excited...and I have no idea who I am anymore ;)

Trev and I are both in our training for our runs coming up. The Rogue Half-Marathon for me in September, and the Portland Marathon for Trev in October! Crazy. The best part is the running/walking/training with friends. It's mentally and physically really good for the both of us.

Trev ran in the inaugural Wild Rogue Relay. An incredible relay, you can read about here. So proud of him and his team! They took 7th out of 40 teams and none of them had done a relay before!


Oh, and go enter to win a Wall Mount for your TV over on this post!! Sweet!