Indeed it is moving fast, faster than I'd like!! I'm in party planning mode, and am super excited about the theme we've picked.
We know that as their 1st birthday, they won't remember a darn thing.
BUT we are celebrating a year of life, making it through this first year, and thanking the many many people who helped us get to the big milestone!
And my family likes a good party :)
Camden 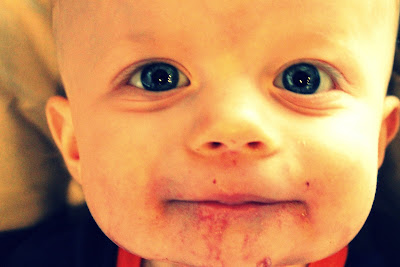 Camden has proven that often, he will be the last to start...but either the first to finish or catch up and you'd never know he'd started behind.
He's the one who dropped to 4.14lbs...yet he now weighs almost 19lbs, is right on and creeping above the 10% on the growth chart!
He was the last to grasp with his hands, and the last to pincer grasp, the one with the worst reflux.. but he's the one who shovels all the food down and loves to eat only table food.
Last to crawl, but is mr. speedy now.
last to stand, but is now doing so independently.
I used to think he'd never crawl, and he'd be a really late walker...now I'm thinking he won't be far behind Christian!
He loves waffles, bananas, pears, grilled cheese, pb&j's, crackers, cheese, eggs, pancakes, green beans, cheerios, turkey, bread.....basically anything.
Taking 2 bottles a day, but isn't loving the sippy cup yet.
But when they turn 1 the bottles go away, cold turkey.
Pacifiers are now only for nap and bedtime, and soon those will be gone as well.
Sleeps from 6:30-7:00pm-6:00-7:00
with 2 naps a day at 9&1 for between 1-2 hours.
He is really vocal now, which is crazy because again...he was the last to start "talking"
says "tit-tit" when he sees the cat
says "kak" for Jack and "chch" for cheese.
Mama's boy through and through.
His top tooth is breaking through as I type! That will be #3
He loves bath time
And he loves the ball pit we had Jack get them for Christmas.
Christian
Oh my little bean.
He's maybe 16lbs now...but growing right along his own growth curve, inching closer and closer each time...he's perfectly healthy, just tiny. Funny thing is, his weights almost perfectly match mine at his age. :)
He has taken his first steps and then some!
9 is the max so far, but every day he tries and takes several here and there. He gets so excited, and I know that this guy, once he's walking will actually just go to running.
He is eating really well and basically likes the same things Camden does, but he is doing pretty good with the sippy cup.
Sleeping about the same as Camden, only usually shorter naps by a  bit.
He's totally talking. Like it sounds like full on real sentences, just can't understand him. It's the cutest thing, and we keep trying to video it!
He is the kid who makes everyone feel like they are his favorite. He will go to anyone, snuggle anyone, and not let them put him down. He's a lover.
He does have his favorites....but he'll make anyone think they are.
He's a Daddy's boy. Loves to greet Trevor and demands to be picked up.
They have gotten pretty clingy and whiny, and I remember this was the age Jack did too, until he started walking. Once he was able to become independent, he was fine. I'm so glad I journaled with Jack, so I can look back and see!
They love to follow Jack around, and the other day Trev heard a knocking and found Christian at Jack's door (which was closed because he was napping)
knocking on the door with a ball. :)
They love to be out and about, love people, love to chat, love to eat, love to find that cat, love Jack's toys (especially his monkey and lovey which are of course off limits) love to sing/listen to music, love to be held.
All 3 boys were recently sick, and Christian developed an ear infection after. Then Jack brought home the stomach flu from his first day back to school after Christmas break...then Christian got it and Trevor and I had it yesterday. We are SO ready for a break from the ickies!!
Happy 11 Months gorgeous boys!

Oh this is kinda fun....my post from last year on this day exactly!