November 14, 2011
The truth is, as amazing as my life is,
and it really is amazing....
there are days where it's takes and takes and does not leave much of me left.
This past week was one of those weeks.
I feel like Jack is growing and changing so fast, and doing so much and I am trying so hard to figure him out and to learn what makes him tick, what works best for him discipline wise, what he needs most from me.
And I have really been struggling with the fact that I don't have time to just study him, like I used to.
It was him and I, every waking moment and now most of my moments are taken up with his baby brothers.
It's not their fault, they are babies, and there are two of them.
It just really doesn't leave me much time with just Jack.
He's been 3.
He's been pushing, and testing and trying to figure out boundaries, and see where we draw the line.
And I feel like I just don't have the time to devote to him like I used to, like I want to.
I feel like some days he's in timeout or I'm struggling to not raise my voice the whole day.
At the end of the day I look back and think
"Did I do it right?"
"Did I get through to him?"
Not every approach works with every kid, and I am trying to find out what works with Jack.
As a Christian, knowing that what's going on in his heart is much more important than what we see on the outside.
The responsibility to raise children in the Lord is huge, and it weighs heavy on my heart.
Side note:
I was looking for some good books that I could read through that were helpful tools in the area of raising kids in the Lord, and just some snippets for resources.
I had heard about a book (I have no clue from who) and the name sounded really familiar, and the title sounded great.
I have to tell you, I was appalled. I wish I could get my money back.
So, even in the "Christian child raising book section" there are really really awful books.
I'm not going to say which one it is...just in case ;)
But, then I found a really awesome one, so that made me happy
Anyways, I saw this quote on Pinterest and it sums it right up. 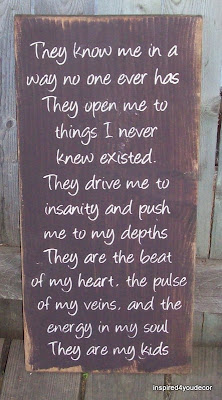 That being said, I'm gonna be taking a blogging break until after our vacation
so it'll be another 3-4 weeks before you hear from me again.
Just need to re-focus
Thanks for reading, and don't go anywhere.....I will be back.
:)