October 12, 2011
﻿The littlest of my men are 8 months old now.
The coolest part of this is that from here on out I can really really remember Jack, what he looked like and what he did, ate, drank, slept etc.
So that just makes it all the more fun!!
We don't have a well baby check up until next month, so no official stats. But here are what the boys are up to!
Camden
Camden sleeps amazingly. He goes to bed around 6pm and sleeps until 6:00am or later. To keep them on the same schedule I usually have to wake Camden up!
I don't let them sleep past 7:00am for schedule purposes.
He cut his first tooth on October 8th and his second one is almost through!! No wonder he hasn't been eating much. A little fussy, and not interested in eating and super sleepy. But otherwise he's done great!
He hates being on his tummy. He rolls over and then just gets really really mad. He is no where near becoming mobile haha! He is sitting much better, can do like 10-15 minutes at a time, but still isn't totally to be trusted  :) He loves pears and oatmeal and bananas and peas.
Will tolerate green beans, pumpkin and carrots.
He is in 6-9 month clothes now and I can't wait to see what he weighs next month!!
He is a little flirt and super smiley.
He is definitley the more laid back, but at the same time wants to be held.
He always wakes up happy.
We've been having him nap in Jack's room, just to free up our room and sometimes his nap coincides with Jack's and they've done great. Plus I think it's adorable, the two of them napping in the same room.
Someday they'll have little sleepovers in their big brothers room :)
Christian
Christian goes to bed the same time Camden does, but he still has mornings he wakes at 4:00am and then cries for a long time before going back to sleep until 6:00am. I have a rule where we do not go in their room until 6:00am, no matter what.
I know they are fine (if I didn't think so I would go check) but they are safe and just need sleep!
He is everywhere. Crawling all over, pulling himself up to a stand on everything he can. Problem is, then he just lets go! We've had a couple bonks already, and I know there will be more to come. His adventurous nature far outweighs his skill level at this point :) This week he started pulling himself up in his crib, but he is getting stuck.  So, he is having a hard time sleeping.  Hopefully soon he'll get back on track.
He can go from the crawling position to sitting and he just started clapping Monday!
He also says "mama" and associates it with me. It was the best feeling ever when he started reaching for me and saying mama....love that!
He loves food. He will eat any and all of it. Doesn't matter what it is!
He is in 3-6 month clothes still, unless it's Carter's brand...then it's 6 months. He is lonnnng and skinny!
He has the best laugh and he is following Jack everywhere, wanting to play with his toys.
So, Jack is learning to share with his brothers and be kind....not always an easy task. But because Christian can follow him around, they have a little bond forming :)
They really are happy, great babies and I am so excited for the months to come.
We are starting sign language and using sippy cups.
Unfortunately, it looks like they have another cold. Jack gave it to them, and I'm sure with preschool and Sunday school he is just getting slathered with nasty germs. Sigh.

We've said goodbye to the swings, and bouncer chairs and hello to lots of toys and cleaner floors.
They are the most beautiful little boys I have ever seen.
So without further ado.....
Oh wait, here are a few of Jack at 8 months. Yeah, adorable I know. 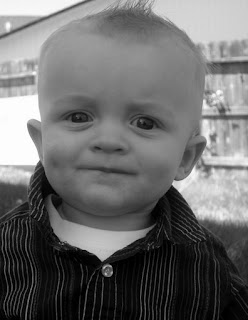 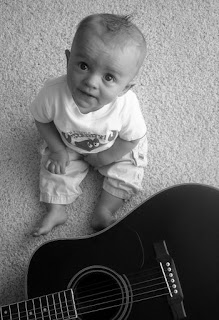 I've been doing these "monthly chair pictures" for...well, 8 months now. And this by far was the hardest haha! These are quite comical. 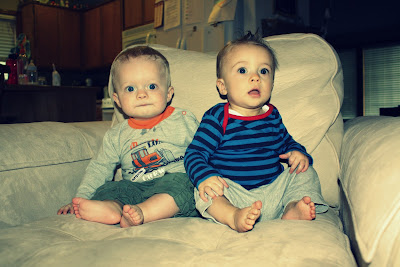 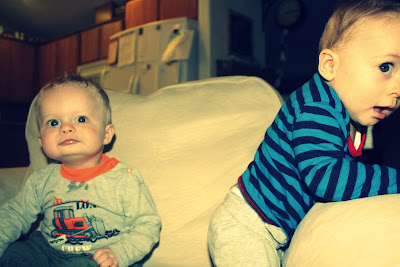 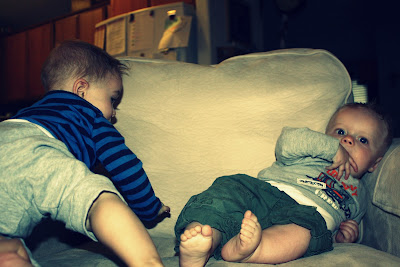 Next time I need backup