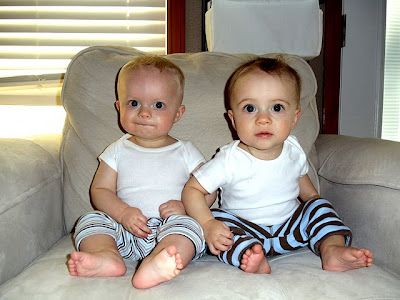 My babies are 7 months old today! Those dragging days of exhaustion are now gone and replacing them are days that go bye in the blink of an eye!

I am truly in love with these little people who wake me up and want my time. I am so thankful for their health, for their presence in my day.

It is downright adorable when they take notice of Jack and vice versa. The other day, Christian was on his tummy and Jack was doin' his thing, being crazy and Christian just started laughing. Jack noticed that he was being watched and proceeded to ham it up. Pure awesome. All Jack has to do is look at Camden and Camden grins bigger than ever! I am anxious for the days when all three boys are covered in mud, playing games and being silly...together.

Camden
Camden is growing like a weed. He is my little chunky boy I never thought I would have. He loves his bottles and food, eating pretty much any solids I give him. He goes to bed between 6-7pm and sleeps until 6-7am (although the last few mornings it's been 5:15am!!) He takes 3-4 naps a day anywhere between 35 minutes and 90 minutes. He is napping in a pack-n-play in our room.

He rolls from back to tummy, but hates it and gets stuck. He still loves his pacifier and enjoys pulling it out, and putting it back in. He has this crazy high pitched cooing sound, it's hilarious and I have got to film him one of these days! He makes the "da-da" sound and still does the humming.

He is trying to sit up, but doesn't balance well yet. He can sit for 20 seconds or so sometimes, but then tips over. No more swaddle for sleep time, just his lovey.
He will be dead silent and the moment you put Christian in front of him he starts blowing raspberries and giggling. It's so adorable. He smiles at everyone, and gives this "flirty" look. With those big blue saucers for eyes, he's irresistible! He is quite the happy baby.

Christian
Christian is still a long and skinny thing, but he makes up for his size in other areas. He is a mover. He has started getting up on his knees and rocking. He goes backwards and gets so angry, starts jabbering away like he's telling the whole world off! He is so close to just taking off.

He and Camden sleep about the same (post on this topic to come!!) but he is still waking once a night for a feeding...ugh.
He rolls, scoots, pivots all around the floor to get to what he wants.
Today in fact, I left the boys for a moment only to return seconds later due to screaming. Christian had swiped Camden's pacifier right out of his mouth and wouldn't give it back.
I replaced the pacifier, and separated them. Walked out of the room, two seconds later, more screaming. I walked back in the room to find Christian gnawing on Camden's foot. Like, "you tattle tale! I'm going to eat your foot off now!" And man, does it hurt when he chews on you! Even with no teeth yet!!!

This kid is going to give me a run for my money.

Christian loves his solids, and we are still monitoring how much he gets since the more solids he gets, the less formula.
He is very deliberate in his grasping, and very exact. Picking up small things and such. So, I gave him some banana chunks rolled in Cheerio dust and he grabbed them right up and stuck them in his mouth (he got it in there most times) and he did great. Loved it. He is definitely further along in this area of development than his brother.

He talks non-stop "ma-ma ba-ba" etc. He is a lover. Loves to grab your face and snuggle in. But he also has stranger anxiety and if he isn't sure about you, he gives you quite the stare down. 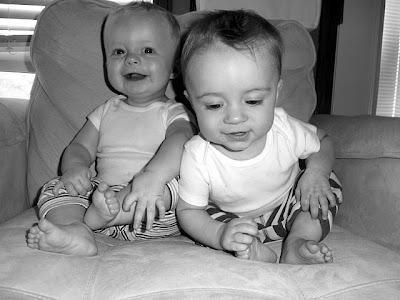