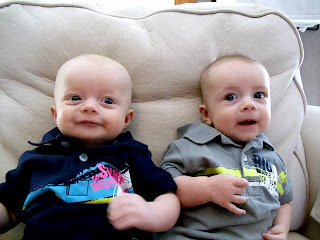 Sigh. Pretty discouraged today. We had the boys weighed yesterday. Camden weighs 11.4 lbs and Christian weighs 10.7 lbs.
For Camden is just gaining just a half ounce a day and Christian not even a half ounce, and he has only gained 5 ounces in the last month. :(
My LC asked if I thought my milk supply was low, to which I replied no. Christian seemed to be okay, just not nursing for long (but remember he downed 4oz from me in 9 min) and just skinny.
Camden had recently started getting really upset after only 3 minutes in, screaming and refusing to re-latch even though he seemed hungry. I thought it was his reflux.
But after seeing the lack of weight gain on the boys she thinks for sure my milk supply has dwindled for whatever reason, and that the fat content in my milk is low.
So....I am taking several herbs and adding in foods known to promote good milk supply. The problem is, it takes a few days for it to kick in. And the pediatrican wants to see them on Tuesday which doesn't give me much time.
So, the LC is having me bottle feed my frozen breast milk and then pump, and even pump through the night (even though they haven't been waking in the middle of the night) to try and kick my supply back up. These little guys are hungry.
The only problem...the hate the bottle. So not only are they refusing me, they are refusing the bottle and I am so stressed about the whole thing.
Everyone keeps saying, "Don't stress or worry, that affects your milk supply" Well what the heck else am I supposed to do!?
At 3 months things were great, and I haven't changed a darn thing. How can I go from totally positive thinking we'd make it to my ultimate goal of 1 year....to totally deflated wondering if we are going to make it another week.
Sorry for the bummer post.