June 10, 2011
4 Months, say what?!
First of all, for those of you who aren't family or close friends, I understand these little monthly updates about the little things the boys do can be boring. Sorry about that. Skip to the pics or skip the post. It's okay. :)
Ok, let's start again.
4 Months, say what?!
Okay, I admit...the first 3 months went by soooooo slowwwwwww. And now things are picking up! Let's give ya a run down on the littlest men!
Camden﻿
aka Mr. Smiley Pants
aka Mr. Smiles Really Easy
aka Mr. Still Pukes a Lot or Sir Pukes a Lot
aka Mr. Gorgeous Big Blues 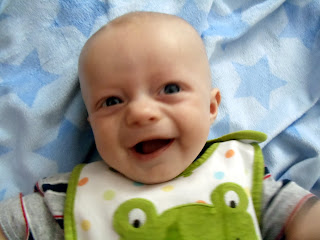 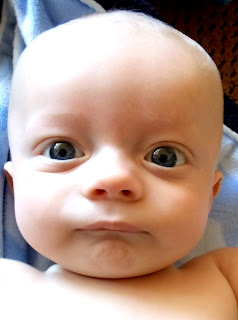 Okay, so this kid gets me. He has this way of looking at you, and raising his little eyebrows and his eyes are now more almond shaped and less just big and huge and round...and boy do they suck you in. And they are super blue. Kind of like the color of denim my friend Jenna said. She nailed it.
He smiles super easy and engages with you so much.
He's our chunker right now. He's starting to get a big snug in the 0-3 month clothes. He has little rolls on his legs, which I have never seen on a child of mine before and I love it. I want to nibble them.
Granted, he still is barely on the growth chart, but to us he is huge! And he does have quite a bit of hair. It's just so darn blonde you can hardly see it!
Camden is a fantastic sleeper. He goes down easy and sleeps through anything. He sleeps and sleeps. He is still waking once in the night for a feed, around 3:00am, but I don't mind it. He goes right back down until about 7:00am and then an hour later goes down for a long nap (until about 10:00am)
He is starting to reach out on purpose and grab/bat at his toys hanging in front of him. He is still exclusively breastfed which means that I am nursing the twins longer than I was able to nurse Jack. Yippee!! Good job Mommy :)
Camden does not know he is 1 of 3 kids. He wants to be held all the time these days. And cries when he isn't. He'll learn I suppose....
If you sit him in your lap with his feet on the ground he will push off and rock back and forth pushing the ground with his feet. So fun!
Trev and I agree that due to his eyes, he is starting to look more like Mommy these days. :)
Christian:
aka Mr. GQ Cover Boy
aka Mr. I will Nap when I want to Nap
aka Mr. Chatterbox
aka Mr. Sometimes I puke more than Camden just to throw you off 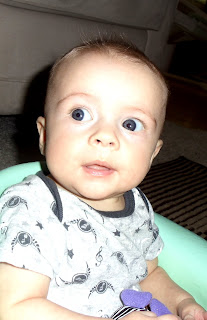 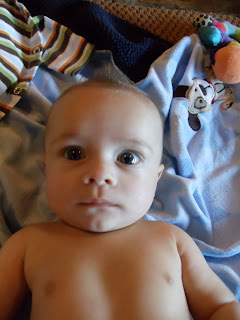 Ah...my olive skinned beautiful boy. Anyone else notice that this kid has perfect eyebrows?! Seriously, he's just gorgeous. And he is a talker! He will chat and chat and chat with you. And smile and he kind of pulls in his lips when he has a big grin and he looks like such a cheeseball! But when the camera comes out...he gets all serious, like he's totally workin' it. It's so funny!
He hates the carseat which we so wonderfully found out while on our trip.
He also is a light sleeper and he doesn't take long naps. He consistently gets up before his brother, which isn't too fun since I'm trying my hardest to keep them on the same schedule. He's kind of got this attitude of, "I will sleep and eat when I want to and not a moment before...but if you wait to long I will be so upset and inconsolable that you will have great difficulty doing either". Oh he keeps me on my toes!
He started rolling over from back to front last week! Both boys have rolled over from tummy to back from the early days, but this is a whole new ballgame! And he kind of scoots on his back, so I leave him in one spot and just a few minutes later he's totally in another spot!!
He loves to look at himself in the mirror (you're so vain, you're so vain)
He is skinny. Most of the 0-3 clothes are a big baggy in the waist/chest area. Although he is quite long so the length is perfect.
And to make up for his lack of long naps...he has begun occasionally sleeping through the night! From about 8:00pm to 6:00am! YES! I will gladly welcome that, thank you very much! And although his brother is still getting up once, it does make for a shorter time that I am up in the night!
I am excited for the next few months which will include starting solids around 6 months, sitting up, getting up and rocking on all fours...all the things I remember Jack doing around this age. And also teething :/ Hoping we luck out and it isn't so bad. Jack didn't have tons of trouble.

We are going in for a weight check today, so I will let you know later what the status is on that! :)
Anyways...that is the update on the little boys! My heart grows more and more each day and I'm looking forward to the next month!