May 22, 2011
We had a wonderful weekend, it was filled with so much! On Thursday we took Jack on a date, just Mommy, Daddy and Jack. We went to a late breakfast and he was fabulous. He got "special cocoa" with whip cream and sprinkles and he was in heaven. We had forgotten how nice it was just be out just the 3 of us, and we miss those times. So, we are going to be doing that more often! :)

On Friday my sweetie and I celebrated 10 years since we got together and we took our a friend's convertible (it was gloriously sunny and warm) and grabbed a coffee and bagel at one of our favorite shops and sat and visited and were sappy. Then we took a nice drive.

On Saturday we took the Jack to an event called "Touch a Truck". It's every little boy's dream....semi's, tractors, dump-trucks, garbage trucks, tow trucks, buses, monster trucks, SWAT cars, bomb squad hummers, fire trucks, etc. Everywhere. And you could get in them, honk the horns, press buttons, pretty much anything you'd like. He was so overwhelmed he didn't know where to go first! He didn't care to get in any of them, he was content to stand and stare in awe. Our friends met up with us for a bit, and they got in a couple tractor's together. The constant blaring horns were a bit much and he'd ask us to 'hold him' when it got loud :) But he ran around from truck to truck so darn excited! And then there was a rock wall. He walked right up and asked to do it. I laughed, not my timid guy. But he insisted....so Trev took him. And then before my very eyes, he was harnessed up and ready to go! I couldn't believe it. He totally climbed on it! And he did pretty darn good for 2 1/2! Such a proud Mommy moment!!
Then he had his first taste of cotton candy, which he said was "soft and sticky"...

Later that day we had a birthday party to attend.....it became apparent that the twins thrive on their schedule because that afternoon/evening was rough. So, we won't be doing a full day like that again for awhile. But it was a great day, and Jack can't stop talking about it!

I love to plan ahead, so I've been making plans for his 3rd birthday which is in August, and I can't even believe it. This next week is full of play-dates and getting ready for our trip. And on Tuesday Camden is getting his tongue clipped (prayers appreciated!)

So, enough blabbing....I will leave you with some adorable pictures! 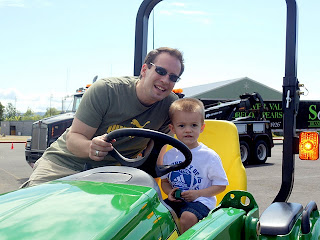 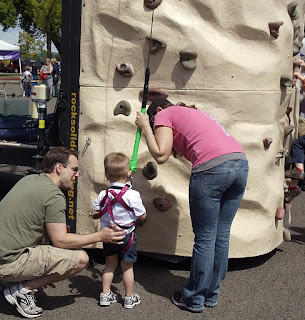 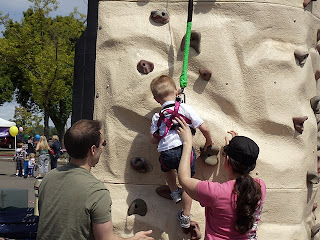 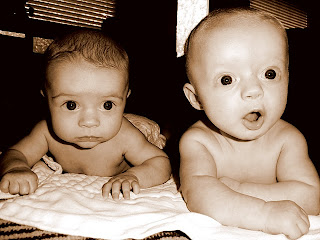 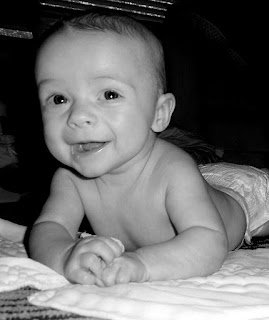