May 10, 2011
Three Months. It's definitely a milestone. I remember with Jack things easing up a bit now, although it didn't become even easier until the 6 month mark. I remember thinking, "oh my goodness, I'm still alive and they haven't committed me yet"...and here I am, thinking the same thing again!

I feel so privileged to be their Mommy, and still wonder why on earth God thinks I can do this. :) I know it's only because of Him!

These little boogers were dedicated at church on Mother's Day. It was a special time, and it wouldn't have been complete without Camden puking while up in front of hundreds of people. Luckily, the pastor had already handed him off to Trev and he handled it well. During the prayer portion Christian's pacifier shot across the stage and down the steps, he wasn't going to be upstaged by his brother. :)

Our days are pretty much the same, we have a nice little routine going now and it makes the day go quickly. They wake up between 6:00-6:30am ready to eat and then they go down about an hour after being awake for a nice nap. Each nap-time, they get swaddled and put to bed slightly awake. They are eating every 3 hours still, and we do eat, awake, sleep all day long. They usually go back to sleep around an hour and a half of being awake. Then at night we do one more feeding before bed which is between 8:30-9:30pm. They usually sleep until 2:00-3:00am and then eat again. I am SO ready for them to sleep through the night. Jack started at about 4 months, so I am hoping and praying they will follow suit!

The are cooing and jabbering all over the place now. Camden is the quickest smiler ever! Christian is a bit tougher to crack, but once you do he will talk and talk and talk! They are growing so much. This Friday is a DR check-up and I am excited to see what they weigh!

Randomly we have come across some breastfeeding issues. Camden's, I believe, are partially reflux related, so he is on Zantac now. But I can't tell you if it's even working. I have no clue what's up with Christian. I am thinking that I have overactive let-down, but I'm not sure why now all of the sudden they are being affected by it since they are older. Lots of squirming, pulling on and off, refusing to re-latch etc. They are on for like 8-9 minutes and then seem to be done. But then sometimes they start crying when I put them down, like maybe they ARE still hungry?! Camden is acting like he did in the beginning, like he can't latch at all and gets all frantic.
It's really frustrating and I have to say, I have been darn close to throwing in the towel. I'd love some advice, tips, suggestions?!?! I dont' want to give this up, but it is exhausting breastfeeding twins when all is dandy, let alone these issues.
Oh, and I feed them one at a time, one side to each boy per 24 hours. I welcome any suggestions! :0) My supply seems to be fine, as when I pump for them I get 4-6oz on each side.

Camden loves tummy time, Christian isn't a fan. They are both still rolling over off their tummy onto their backs, which makes Camden mad and Christian happy haha.

They are seeing Jack and smiling at him, and for the first time the other day Christian saw Camden and smiled and cooed at him, and he cooed back. It was so cool! 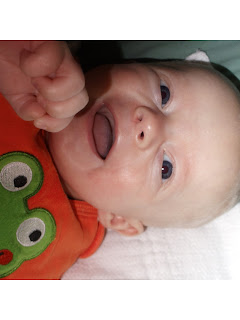 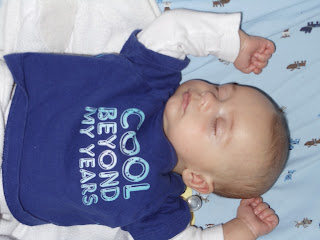 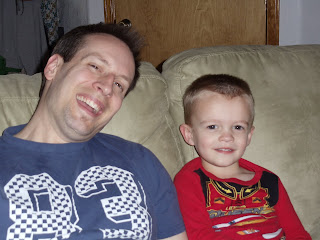