I'm so glad we had Jack first. Had we not, I would think there was no end in sight to the sleepless nights and the puke spewing everywhere. I would not believe anyone who told me "this to shall pass" and I would think I was never going to leave the house again.
BUT...I know that there is an end, and it's not too far off in the grand scheme of things. We just have to push through these sleepless nights and get used to Camden puking all the time, everywhere....and before we know it, we will be telling them to stop throwing food at each other. :)

Here was how last night went down....
Feeding at about 8:00pm after which they decided they did not want to sleep. Not too long later Christian decides to scream.......really really loud.....for quite some time. His cry is extremely angry sounding. I finally had exhausted all other ideas and at 11:00pm I nursed him. He fell asleep.
Camden on the other hand, wide awake. I took Christian to our room and went to bed. Trevor stayed in the front room trying to get Camden asleep. He'd fall asleep and as soon as Trev would try to bring him back to the bedroom he'd wake up wailing his high pitched wail. So...
another feeding at 2:00am and I can't remember what happened after that...Christian did go back to sleep.
5:00am and time to feed again....Trev and Camden still in the front room, Trev asleep on the couch and Camden in the pack-and-play.
After the feeding Christian goes back to sleep. Camden pukes. So we take him and try to change his clothes. He pukes again. Then he pees everywhere. Get second set of pj's ready to change him into....he pukes on them. Then he pukes again and again. Every time we moved him, he puked.
After 3 sets of attempted pj's and 2 blankets he's mad, awake and hungry...so I feed him. Then he pukes.
Then Jack wakes up.
And when I say puke, I don't mean a little spit-up. I mean a lot. And it shoots out and it drenches everything in sight.

** UPDATED** We have a doctor appointment tomorrow for Camden just to make sure his weight gain is okay and see if there could be anything else going on. Prayers appreciated! :)
Sigh....
This too shall pass............:) 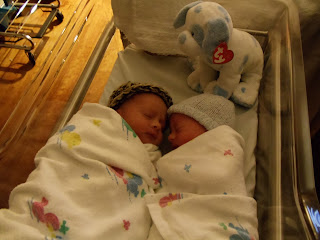